After only half a day in Manila, I made my way up to Baguio, a fairly big town in the North of Luzon, the main island of the Philippines. There I was supposed to meet up again with Dolf and Chris from Belgium whom I had traveled parts of Laos before. After an 8 hours bus ride I finally arrived and was greeted by the guys who had already arranged our accommodation. It was really nice to see both of them again and to know that some awesome adventures will await the three of us. However, Baguio was only the jump-off point to the Cordillera, the mountainous and remote north of the Philippines. After a few reunification beers, a hearty dinner and a good night of sleep, we took off to Sagada.

We arrived in the tranquil mountain town of Sagada in the afternoon. After checking into the local home stay, we wanted to explore the surroundings and find the famous hanging coffins. Buried in those coffins hanging in the cliffs are elders of the animistic Applai tribe and even today, those who can afford it, opt for that type of burial. Some of the coffins in the area said to be 500 years old. We walked down a windy path into the so called Echo Valley and there they were – coffins, carved and painted, hanging steep up in the rock of the surrounding cliffs. It was a pretty impressive sight and despite a few rain showers, we managed to get some good pictures. 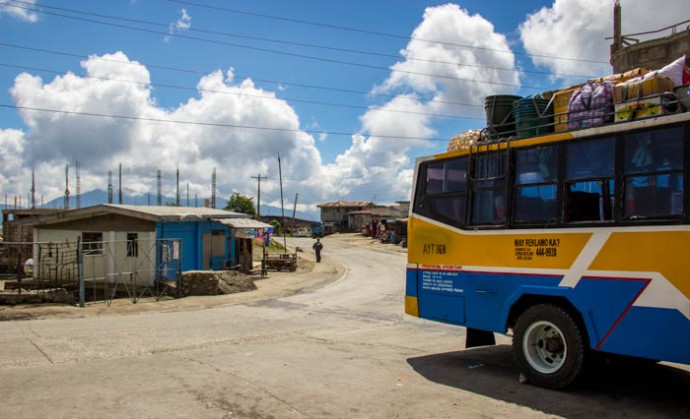 On the way to Sagada through the Cordillera Mountains.

The view of Sagada from our terrace.

Sagada view out of our room. 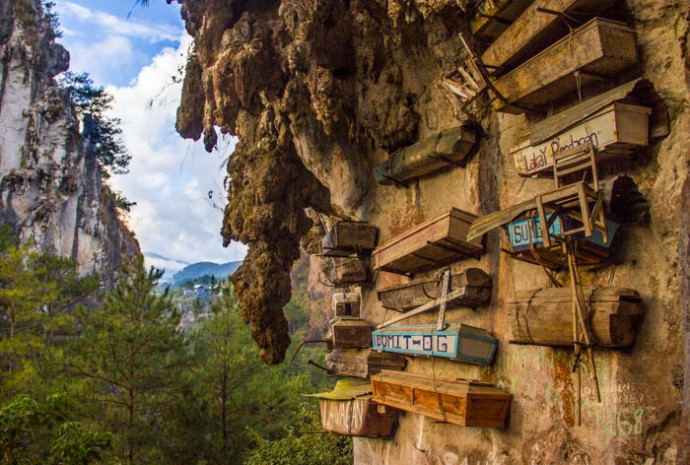 The next day Dolf was feeling sick, so Chris and I decided to do a couple of hikes by ourselves. We wanted to save the money for a guide and do it by ourselves. We got some info at the local tourist info and started our trek with the destination Kiltepan Mountain. The hike was a short one and we arrived at the viewpoint where we could overlook the Kiltepan Rice Terraces. The view was great with the vast terraces appearing underneath misty clouds. Amazed by the scenery, we didn’t know that this was nothing compared to what we would discover a few days later.

Kiltepan Rice Terraces from the Viewpoint. 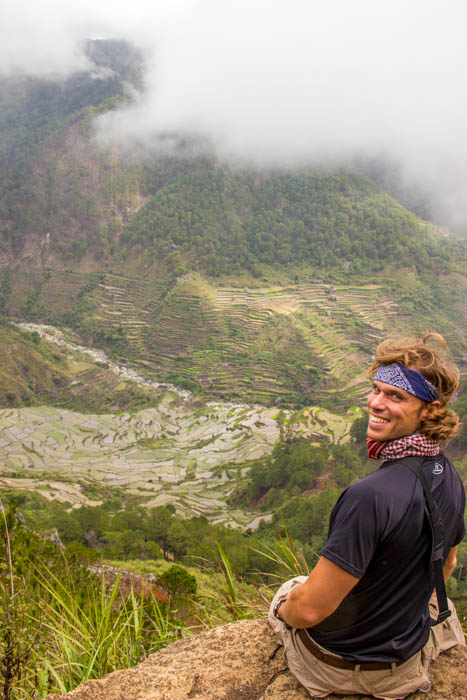 Having fun despite the rather mediocre weather.

Back on the main road, we took another path which was supposed to lead us to the hilly grasslands known as Marlboro Country. Luckily the weather changed and the sky cleared up so we could enjoy the hike through the pine forests. After a bit of walking through high shrubs we were rewarded with the most amazing view of this trip so far. It was wide open country with an almost 360 degree view down lush green mountains and rice terraces. We were surrounded by grassland without any other people in sight. It‘s a cheesy name but Marlboro Country actually sums it up really well.

Panorama from our viewpoint. The hike was really rewarding.

After Sagada we boarded a Jeepney, a shared Jeep used for public transportation all over the Philippines, to make it to Banaue. Banaue and its little neighbor Batad are home of the world famous Ifuago Rice Terraces. Expecting a laid back mountain town, we were pretty disappointed by Banaue. It was fairly big, busy and rather unattractive with lots of tourists and the locals spitting a lot of Moma, red spittle from chewing the bethel nut, onto the streets and sidewalks. The enduring downpour didn’t improve our impression. Since we were not able to do anything, we spent the rest of the day in and around our guesthouse with high hopes for the next day which should take us to hopefully more pristine Batad.
We took another Jeepney and once again rode on the roof. Whenever we had the chance so far we did it and it is so much fun. Not the most comfortable way of traveling, but the wind in our faces and so much better views than riding inside – we enjoyed every bit of it.

We got off at Batad Junction from where we had to walk up to the so called Batad Saddle. From there it was another 45 minute hike to Batad. We arrived in the upper parts of the village situated right in their famous rice terraces also known as the Amphitheatre Our guesthouse had a terrace overlooking the whole valley and the village itself. It was marvelous and after we had checked in, it was clear that an extension of our stay in Batad was needed. We made the accordant arrangements and took off to our first hike which took us through the terraces, the villages and down a big gorge leading to the mighty Tapia Falls. The masses of water coming down the fall were enormous and swimming in it was like swimming in the ocean with fickle waves and wind blowing in your face. 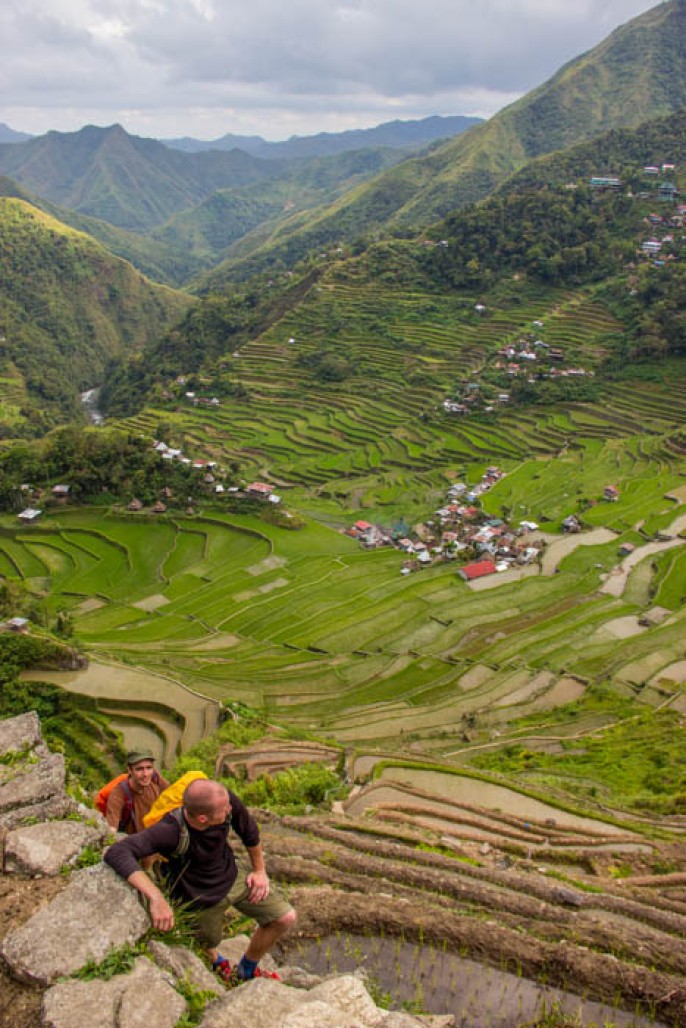 For our second day, we booked ourselves a local guide to take us through the terraces again and to the village of Cambulo on the other side of the mountains surrounding Batad. Our female guide Maribel was very friendly and told us a lot about the background and history of the terraces. The distinctive feature about the terraces in Batad is that they are stone walled whereas the ones around Banaue are mud walled. It is said that the terraces are more than 2000 years old. But even more impressive than those facts were the views from the top of the terraces. The lush green fields, their complex arrangement and their reflections were something we had never seen before. All three of us said that this was the most impressive scenery we had come by thus far. It was incredible and I definitely took too many pictures of that proclaimed 8th world wonder.

Our hike with Maribel took us to Cambulo where we spent a couple of hours for a swimming break in the river nearby, a good lunch and some fun with local kids as we visited their school. Having played basketball for most of my life it was also great to see them having a good and roofed court – and that in the middle of the remote mountains in the Philippines.

On the way back along some sketchy paths.

In the Philippines every little village has a proper basketball court. So sweet. 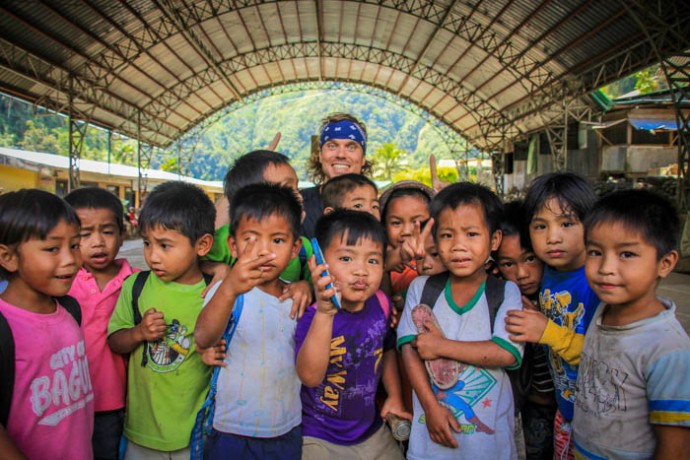 Hanging with the school kids. Nice shot by Chris.

After a strenuous hike back through some overgrown and almost non existing paths, up the steep hills of the rice paddies and along the sophisticated irrigation canals of the Ifuago engineers, we made it back to our guesthouse. There our host surprised us with a tour of the traditional Ifuago he keeps behind his main house. It was great to see how people lived not even that long ago and to hear about their customs and history. It was a great finish of an eventful day. Exhausted but very happy we called it a day with a bottle of the local rice wine.

Inside the traditional Ifuago House of our host in Batad.

Starting to travel a country from the North has proven to work out well. Once again I was lucky to explore remote regions and take in some fabulous scenery before heading to the Southern parts of the country.
Summing up this side trip, it is safe to say that Batad was our highlight. The fact that it is still only accessible by foot makes it rather unattractive for mass tourism. Also most of the people that come there are day trippers so staying there overnight makes for a truly authentic experience. So far Batad was able to keep its authenticity but signs of change are already becoming evident. A big part of the rice fields is apparently only maintained because of the tourism and inside the village a lot of hustling for the tourist money is going on. That being said, it is not pushy and people are still super friendly and generous.
A fact, which applies to the whole country of the Philippines, is that people speak very good English. This enables one to actually have a proper and deeper conversation with people which I haven’t experienced so far. It makes traveling so much more worthwhile and I am already looking forward to our next adventures in this beautiful archipelago. 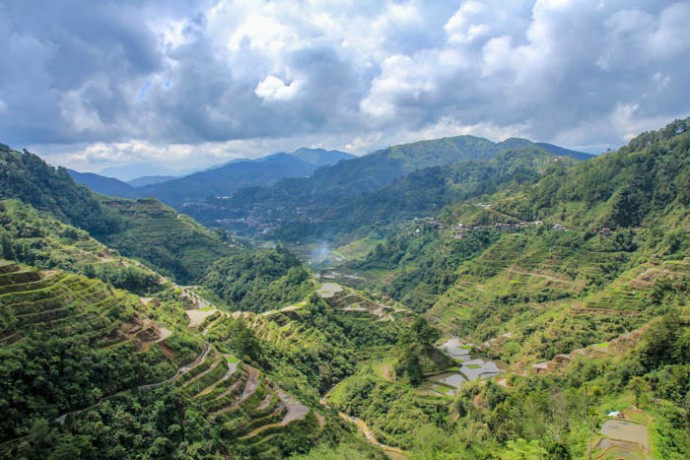 The terraces of Banaue. These are mud walled and after Batad, were not so impressive anymore.

Travel: Why I Think The Philippines is SE Asia’s Next Backpacking Paradise

Organise your own trip

Ready for your adventures in the Philippines? Here's a useful checklist to help you plan your dream holidays.

10 reasons to visit the Philippines

© 2020 The official website of the Philippines Department of Tourism in Australia & New Zealand. All rights reserved